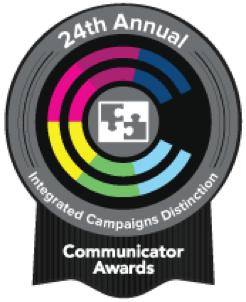 BlaineTurner Advertising is recognized for winning a 2018 Communicator Award of Distinction in the Integrated Campaign category.

The Communicator Awards is the leading international awards program recognizing big ideas in marketing and communications, and receives more than 6,000 entries from companies and agencies of all sizes–making it one of the largest awards of its kind in the world.

Greater Morgantown Convention and Visitors Bureau (GMCVB) and BlaineTurner Advertising worked together to create the GoMo campaign in 2017 to show visitors, and locals alike, how to get more out of Greater Morgantown–where to eat, play, shop and stay. The GoMo campaign consisted of four persona videos on the website’s homepage and individual landing pages, a ‘How Do You GoMo’ quiz, HTML 5 ads, Facebook Ad campaigns per persona, a Facebook Canvas Ad, and numerous social posts.

The Communicator Awards is sanctioned and judged by the Academy of Interactive & Visual Arts, an invitation-only group consisting of top-tier professionals from acclaimed media, communications, advertising, creative and marketing firms.

“The CVB is thrilled to accept the Communicator Award of Distinction for the GoMo campaign,” said Executive Director of the GMCVB, Susan Riddle. “Working with BTA in creating this campaign and having it result in an award is icing on top of the cake when it comes to its success.”